Listen to Lesson 1
Go to Next Lesson
Fluency Programs 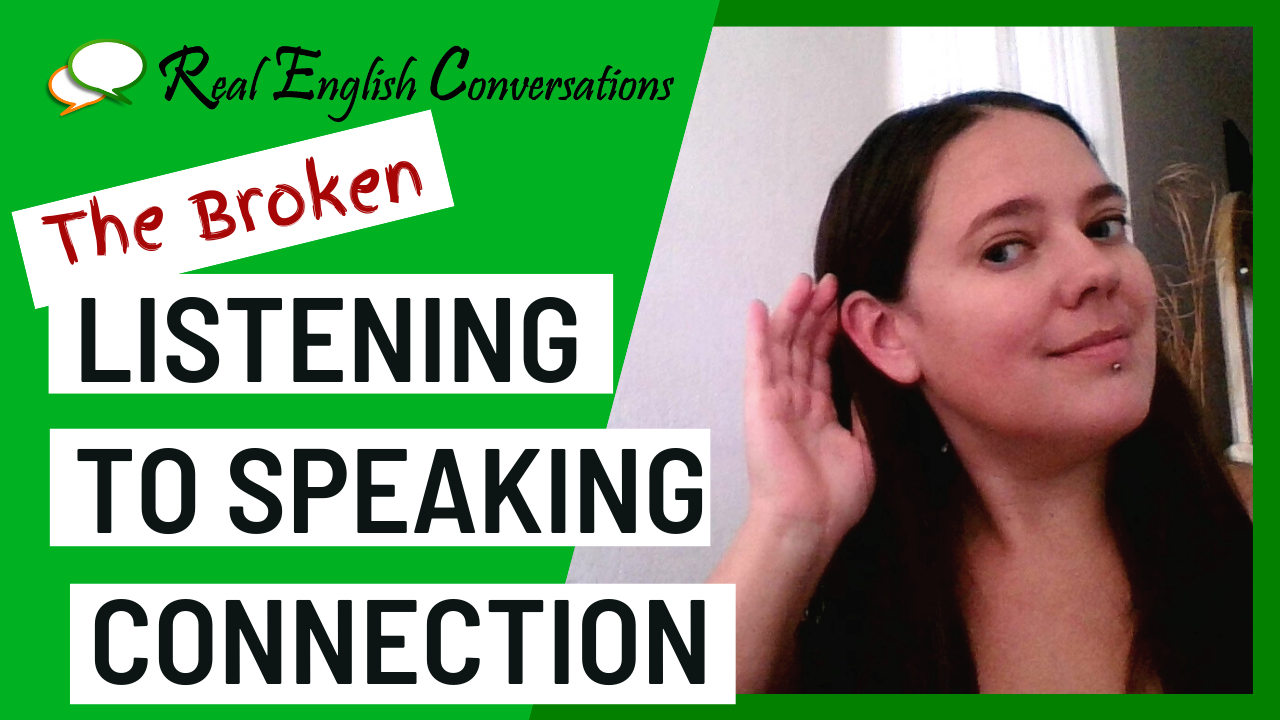 Have you ever listened to something in English…

You can hear and understand almost every word perfectly!

But later, when you try to speak in English…
You can’t remember and use the words that you heard and understood.

Because of that,
It feels like you can only remember really simple words.

The same simple words that you use ALL the time.

To try to improve your speaking skills, you have decided to do things like:

Things that are ‘good practice’ for someone at your level.
After all, you aren’t a beginner anymore!

There is ONE really important step missing here.

And it’s probably the reason why you aren’t making much progress with your speaking skills.

Listen to this podcast lesson to find out WHY you can’t USE these words in your speaking.

And what you need to do, to change that!

The Broken Connection from Listening to Speaking (Part 1)

Hi, everybody, this is Amy Whitney from realenglishconversations.com and I have something very special planned for you guys.

I have a three-part podcast episode that’s going to teach you some really important lessons related to feeling confident and improving your speaking fluency.

So the goal of these three podcast episodes is to really help you to identify and understand what’s going on, and also the types of activities that you need to do if you’d like to break this cycle and to start developing a positive cycle of improving your confidence and speaking fluency.

I thought a great way to explain some of these ideas that I have is to share a story with you. And this one actually comes from the very first day that Curtis and I moved to Mexico, the first few hours that we landed on the soil here in Mexico. And some of the challenges that I had to face immediately as somebody who was a new immigrant living abroad in another country, that spoke a different language than my native language.

Just to put it into perspective so that, you know, more or less the type of language level that I had at this point, I was about an intermediate level, it kind of went up and down over the period of this year just due to being super busy and unable to focus on my language skills right before I moved to the other country, to Mexico, because selling your house, trying to figure out how to sell everything that you have collected over a 15 year period, that actually takes a really long time. And we were working full time at the same time.

So anyway, didn’t have a lot of time to practice, my level had kind of slipped down to an intermediate level again, but I did have a base in the language, at least thanks to discovering how to finally start learning a language in the correct way the previous year.

So here I was, Curtis and I, we caught our flight in the morning. We were on the plane. We stopped in Seattle for a connection. We arrived finally to the beautiful, sunny destination of Puerto Vallarta.

And as we went through the process of getting our cat, which we brought with us, Moka, she had to get her Mexican paperwork as well because she’s a live animal. And then we had to get our bags and we headed to the car rental agency because we knew that over the next few days we were going to have to find a place to live.

So here we were in the car rental agency and I realized that the agent spoke about 20 words of English and this conversation was going to have to go down in Spanish. And I tried to explain that I had purchased the insurance online already at the time that I rented the vehicle. And she needed to check her records because I bought it and there was no way that I was going to pay another $2 because that was the cost of the full rental. I wasn’t going to pay that again for insurance because I already paid for it.

And that’s something that’s a pretty simple thing to explain. I just did it in about 20 seconds in English. But I remember in that moment I felt like a complete idiot that was unable to express such a simple idea. It felt like as I was trying to explain things I couldn’t remember, words that I knew I had learned or I knew I could understand when I was listening to something, it’s like my mind just went completely blank and I just wasn’t able to think quickly. I felt out of practice.

And I think one of the things that made it especially bad was that I was thinking to myself, “Amy, you have been learning Spanish for years, like, what is wrong with you? Why are you not able to perform in real life in the real world? Every time this happens, you can’t remember what you want to say. You can’t express your ideas well, like it’s OK. You get through the situation, but come on, you’re better than this. Why do you always do this?”

And that’s actually my confidence speaking the self-talk that we have, the things that go on in our head, even if I go out through the situation, which I did, and I got that car rental successfully, which is great, I still wasn’t really satisfied with that level of performance and it really was feeding into a low confidence spiral, because this happens a lot, you go through a situation you’re really unhappy with how you performed and you feel bad about it afterwards, you feel bad about all of the effort that you’re putting in and how nothing that you’re doing is actually working.

And we’re saying those things to ourselves and it kind of makes us not want to try again because why would we want to do something that we know is going to be very, very uncomfortable and to provoke all of these really horrible feelings.

Now, here’s the really interesting thing. Before this time, when we moved to Mexico about six months or eight months earlier, Curtis and I had spent a significant time in Colombia and Ecuador. I think it was about a three month period.

So during that time, I was practicing speaking and I was listening and doing all of these things to try to improve my Spanish. And then when we got back to Canada, things got busy because we decided to sell our house. We were ready to move to another country and we were working full time while all of this was happening. And during that six months, that break, you know, it wasn’t really a break because I was still listening to podcasts every day.

I was still watching YouTube videos and different things that I like to do, reading articles in Spanish and things like that, so it wasn’t like I was completely out of touch with the language. And when I listen to something, I could understand a fair amount of it. My listening skills had improved significantly after my trip to Colombia, mostly because of the really challenging accent that was in the coastal area there, it really sharpened my listening skills. But, you know, I could understand the words when I heard them.

But at the time of speaking, those words are just not something that were available. In my speaking, I couldn’t remember them. And this is a really, really common situation. What I’m describing here, this is a really common situation that now that I’m a teacher and now that I’ve moved past this point, I’m able to look back and see something that is really critical. And this is the lesson of this episode, the one that I really want you to hear and I want you to understand.

Speaking and listening are totally different skills, and you need to start thinking of them as different skills. Let me explain to make it really clear. When you listen to something or you read something, what you’re doing is you’re actually hearing it. Somebody else has chosen the words, they’ve picked the words, they thought about the words they wanted to use. They’ve thought about the sentence structure that they want to use, applying all of the correct grammar and structure and everything.

They know how to pronounce the words correctly. And when you hear it, the only thing you need to do is recognize those words, put the message together and catch at least the general message. And the truth is that even if you only understand 80 percent, you’re probably still going to understand enough to get the idea. When we flip that around where you are, the one that has to create that sentence, you have a thought in your head and you have nothing else.

To try to help you really understand this, to actually observe it, be aware of the difference and do an activity to really show you the difference between listening skills and speaking skills, I prepared a very, very special and interesting.

Go to the Listening to Speaking Challenge Activity here

And don’t worry, I’m not going to leave you hanging by the time that we’re finish this three part podcast series, you’re going to have a really clear understanding of the connection between confidence, speaking fluency and the type of activities that you should be doing if you actually want to improve those skills.

So what you’ve got to do right now is go into the podcast description area and click on the link to do that activity that I’ve prepared for you. And this is something that is going to be so powerful because when you are aware of the problem and then you have this experience where you can clearly see that listening skills and speaking skills are completely different.

And just because you heard those words doesn’t mean that you can use them. It’s going to help you to be in the right mindset to start taking the steps that you need to take to finally become a confident communicator in English in any situation, even if you’re not prepared for it.

So I will see you in the next episode where we’re going to be focusing a little bit more on confidence.

And in particular, I’m going to be sharing with you  another one of my challenges that I had within the first week of living in another country. And this is something that I’ve really struggled with for a long time. And it took me several years to get over. So I look forward to talking about that and seeing you in the next episode.

Go to Next Lesson

Are you ready to speak with better fluency, understand fast English, and to feel CONFIDENT speaking in English?

Find out how Curtis and Paula can help students just like you!

Is Curtis the Right Teacher for You?

Get started with a 25-min trial lesson where you can explain exactly what you want to improve about your English and to experience the benefits of a one-to-one lesson that is adjusted specifically to YOU!

Book a Trial Lesson with Curtis

Are Paula's Classes What You Need?

Meet Paula and explain what you need to improve with your English in a 25-min trial lesson. This class includes a short activity so you can see Paula's teaching style and how much you will learn with her!

Book Your Trial Lesson with Paula